The Midium® proudly presents the La Voix du Luthier Onde acoustic resonator + Haken Audio ContinuuMini together for the first time in the United States as a complete set.

Electronic musical instruments, like synthesizers and drum machines, are typically heard through studio monitors and amplifiers that depend on cones to push air through space.  The La Voix du Luthier Onde brings these instruments' sounds to life in an acoustic resonant chamber, allowing the audience to feel and hear electronic music and synthesized sounds play in an acoustic body reminiscent of a guitar's soundboard.  The Onde's dual soundboards produce a more immersive sonic environment, and the artist has full control over how loudly each of the Onde's sides––or soundboards––resonate.

The La Voix du Luthier Onde is made by hand in Guyancourt, France, by expert luthiers and woodworkers, and stands as both a unique music machine and resonator, as well as a work of art.  Listening to your synthesizers play through the La Voix du Luthier Onde acoustic resonator brings an organic sound to even the most clinical-sounding electronic musical instrument.  It may be operated using mains power or batteries (not included), and a bluetooth connection may be used for further wireless playing. The Haken Audio ContinuuMini's playing surface can take input from one or two simultaneous touches at a time, responding to the lightest pressure for maximum expressivity.  Nuanced finger movements along the touch surface allow the artist to enjoy the ContinuuMini's unique tactile characteristics, while its bidirectional implementation of MPE and MPE+ means it can control other synthesizers and be externally controlled by others, as well. With its pedal input, Continuumini can make full use of a sustain pedal for dynamic sustain or a number of other uses in EaganMatrix, allowing an artist to add more expression during a performance or recording session.

The ContinuuMini's pedal input can also be used to communicate with control voltage converters, which enables it to work together with analog modular systems.

Our set comes with the attachment needed to unite the La Voix du Luthier Onde and Haken Audio ContinuuMini.

Version 9.55 of the EaganMatrix Editor may be downloaded by clicking this link. 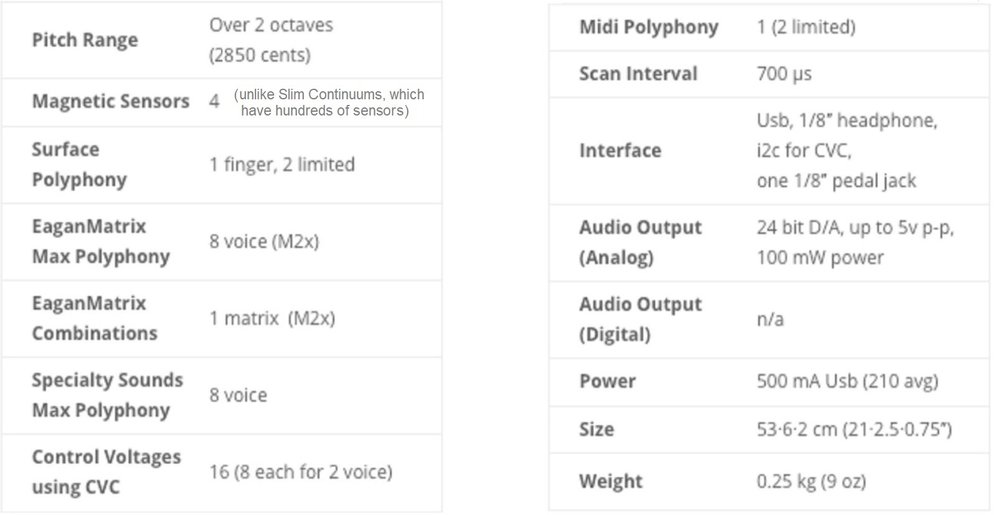