A New Way to Play

LinnStrument's patented touch-sensing technology permits you to slide in pitch directly from one note to another, tilt your finger forward/backward for subtle timbral variation, or vary note loudness with pressure or velocity, all sensitive to very light touches. Why is expressive touch control important?

LinnStrument is an expressive electronic music instrument. I (Roger) define that as providing the ability for each finger to control a note's continuous loudness (by pressure and strike velocity), pitch (by left/right movement) and timbre (by forward/backward movement) over its duration, thereby providing a level of performed musical expression approaching that of fine acoustic instruments or the human voice. By comparison, a standard MIDI keyboard consists of little more than on/off switches, albeit with velocity sensing, monophonic pressure sensing for the last 5% of the key's travel, and two sideways knobs to create unnatural-sounding pitch bends and mathematically-perfect vibratos.

So why is this expressive touch control important? Because under skilled hands, the ability to capture subtle musical gestures enables more interesting and expressive solo performances than a MIDI keyboard's on/off switches. Consider a guitarist's string bends, a violinist's skillful vibrato, or a wind player's subtle breath control, all of which can't be authentically replicated on a MIDI keyboard.

In my view, the limitations of MIDI keyboards have resulted in electronically-generated music being used largely for background music:

2) Background for dance. DJs possess great skill in creating music for dance, but the dance is usually the foreground, the focus of attention.

3) Background for film and TV. Many film and TV scores are very beautiful and highly valued, but mainly in a supporting role for the picture.

All of the above are created by skilled individuals and are compelling and expressive in their own ways, but I would argue that this music is valued mainly for its support of a different foreground element. I would also argue that few listeners would pay to attend a sit-down concert performance of the above without the foregrounds they support.

Generally when we think of great expressive acoustic instrumental artists, we think of past soloists like Miles Davis (trumpet), Jimi Hendrix (guitar), John Coltrane (sax), Itzhak Perlman (violin) or others, artists for whom large audiences would pay to attend a sit-down concert where the artist is the center of attention, the foreground.

I think that in 50 years, music historians may look back at this time as the Era of On/Off Switches.
‍

This is why expressive touch control is important.

Until recently, musicians have been faced with a false choice: the expressive control of acoustic instruments or the technological advantages of electronic instruments. LinnStrument and other expressive electronic controllers offer a thiird way that provides both.
‍

How are the notes arranged?  Why not a piano note arrangement?

Stringed instruments don't have this problem because the semitones are uniformly spaced. 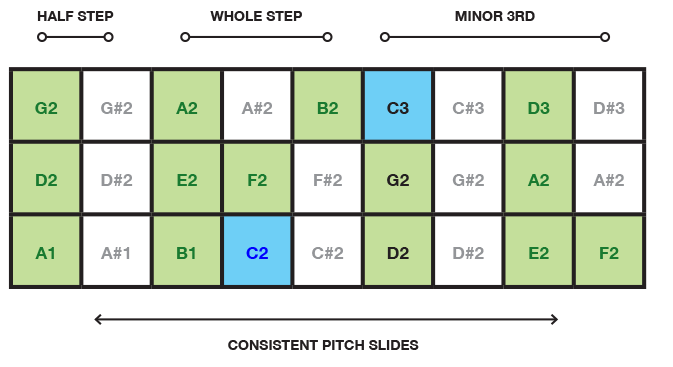 So LinnStrument's notes are arranged as on any stringed instrument. Each row is a series of consecutive semitones, so bends and pitch slides are simple and intuitive: play a note, slide left or right to the destination note, then wiggle it for vibrato.

You can tune the rows like a guitar, violin or however you wish. By default they are tuned in musical fourths (five semitones), like a bass guitar with 8 strings. This note arrangement is called the 4ths String Layout and is fast becoming a new standard for expressive musical control, used in Ableton Push, Roli's LightPad Block, a variety of iPad apps and now over 3600 LinnStruments sold.

To make it easy to find the right notes, the scale notes are lit, with all the C note pads lit in a different color and having a Braille-size bump for tactile feedback. Alternatively, you can light any scale and in any of 10 colors.

Works with every MIDI synth. MPE-compatible.

LinnStrument sends standard MIDI messages over its USB or MIDI output jacks, and is configured by default to work out-of-the-box over a single MIDI channel for compatibility with every MIDI sound generator in existence, but with the advantages over a MIDI keyboard of performed vibrato, note-to-note pitch slides, polyphonic pressure sensing, and forward/backward touch control. And LinnStrument gets around MIDI's one-channel Pitch Bend limitations by automatically quantizing polyphonic pitch slides to semitones, while leaving solo pitch slides continuous.

To also perform fully polyphonic pitch slides and Y-axis gestures, you'll need a synth that's compatible with MPE (MIDI Polyphonic Expression), a new MIDI standard that uses a separate MIDI channel for each touch. It's already supported in a long list of major software and hardware instruments. We even include free sound files for Apple's MainStage and Logic, plus a free license for Bitwig 8-Track, all of which support MPE in their built-in synths.

‍Split Keyboard / Strum / CC Faders- You can split the keyboard to play two different sounds, and adjust the split point as you like. You can use one split to strum notes fingered on the other split as on a guitar. Or use either split as eight horizontal Control Change Faders to adjust 8 sound parameters in real time as you play.

‍Low Row - The lowest row of note pads can be reassigned to act as a Sustain Pedal, a Modulation or Bend strip, to momentarily enable the Arpeggiator (sliding your thumb to vary its rate), to restrike a fingered chord, or even as a 3D control strip, modulating three parameters at once.

Play on a table or standing - you can play it on a table like a keyboard, but at only 5 pounds (large model) and 1" thin, you can also use the included guitar strap pins to play it standing up like a guitar. Single or Dual Foot Switch Input - Connect a standard single or dual foot switch for foot control of sustain, Arpeggiator, octaves, Tap Tempo, Control Change messages and more.All Settings on front panel / Open Source software - All of LinnStrument's settings are available on the front panel so there's no need to fumble with computer editing software. And even with all of LinnStrument's versatility, we didn't want to limit how people would use it. So we released the software as open source, allowing you to customize everything.

There's a revolution brewing. People are starting to understand how limiting it is to play music with on/off switches. Once you've played LinnStrument, it's very difficult to go back. We (Roger and LinnStrument software creator Geert Bevin) invite you to join the revolution.